The future of classical music: CSO concert aims to appeal to young people

The future of classical music: CSO concert aims to appeal to young people 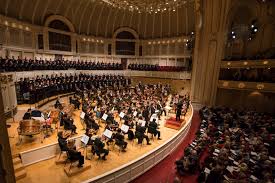 Young people in particular are more interested in Maroon 5, Lorde, One Direction, Beyonce. Millions tune in to watch “The Voice” or “American Idol.” Few watch “Live From Lincoln Center.”

Driving home from work recently, I listened to a terrific jazz tune, a live recording that aired on the local public radio station. After the performance, the band leader explained the tune’s origins and paid tribute to his musician-uncle who had showed the classically trained younger man that “playing the piano could be fun.”

The implication, of course, was that playing classical music was not fun.

At about the same time, someone posted to Facebook a video of 3-year-old Jonathan in his living room “conducting” Brahms’ Symphony No. 1. The kid was no stranger to the piece; he was accurately cueing entrances, dynamics and phrasing. He was definitely having fun.

Watching the video provoked deja vu: I, too, used to conduct big orchestral pieces in my living room as a tot, using a makeshift baton: an extendable car antenna, provided by my father. I was no prodigy, that’s for sure. Unlike young Jonathan, I was merely reacting to what I heard. But it excited me nonetheless: those big brass blasts, flurrying strings and sweeping melodies found in the Romantic orchestral repertoire.

Classical music was a great early discovery. It was surely not boring, not to me.

And it’s clearly not boring to Seth Gilliard, the 23-year-old violinist soon to play a concert with the Charleston Symphony Orchestra.

Nor is it boring to 10-year-old ballet dancer Satya Tranfield, part of the Jan. 25 “Classical Fusion” concert.

Nor is it boring to 9-year-old cellist Amy Goto, also to be featured.

These three young artists grew up listening to classical music, and regular exposure instilled in them a profound attachment. And now the Charleston Symphony will employ them as willing bait. Thanks to a grant from Boeing, the symphony is presenting a daytime program designed to appeal to families.

CSO Concertmaster and Acting Artistic Director Yuriy Bekker said the concert is a showcase of innovation and achievement he hopes will inspire young people, regardless of their interests.

The “Classical Fusion” concert will combine musical styles. Gilliard will play Bach’s Double Violin Concerto with Bekker, as well as a classical-pop mash-up.

“It’s a very interesting approach to a young audience that’s never been exposed to classical music,” Bekker said. “It’s a friendly way to lure them in.”

Gilliard attended Furman University, where he was concertmaster of the school’s orchestra and earned a bachelor’s degree in music performance in 2012. His music education began years earlier, in the strings program at Ashley River Creative Arts Elementary School. His mother played viola, and the 5-year-old Gilliard liked to experiment on the instrument, much too large for his diminutive stature.

“I chose violin because it was smaller,” Gilliard said.

His sister studied piano. His parents loved music, played recordings at home and encouraged their children to excel.

“They started us down that road; they always were involved,” he said.

In recent years, Gilliard has taken an interest in improvisation and hybridization, he said. “I’ve always listened to everything. I love pop music. I’m a big hip-hop fan. I listen to the radio. I keep up with the Billboard charts. I also play jazz; I was a member of two jazz combos in college. … What I do now is arrange contemporary pop tunes for violin.”

Now he’s making a name for himself as a crossover artist.

“Undoubtedly, I wouldn’t be able to do the things I want to do … if it wasn’t for classical music,” he said.

But he’s not giving up on the classics. At the last MOJA Festival, he presented a recital of music by William Grant Still, Bach and others. He’s been flirting with Prokofiev’s very difficult violin concerto.

Amy lives in Columbia, attends a Montessori school and travels to Charleston for lessons with her teacher, Natalia Khoma. She will play the first movement of Haydn’s Cello Concerto No. 1 in C major at the “Classical Fusion” concert.

Amy’s parents, Shingo and Chinami Goto, are Yo-Yo Ma enthusiasts. “When Amy was born, we played Yo-Yo Ma all the time at home,” Shingo Goto said. “Therefore it was very natural for her. We asked her if she wants to play like Yo-Yo Ma.”

That was when she was 2½ years old. She started with the Suzuki method, soon graduating to private lessons. Discipline has helped a lot, her parents said. Amy practices four to five hours a day. She’s working on Bach’s Cello Suite No. 1 (the six suites are difficult, unaccompanied and obligatory for all serious cellists).

She’s familiar with the name “Justin Bieber,” but not his music, she said. She prefers to listen to classical music. Sometimes The Beatles. She also likes to watch ballet.

Amy’s musical education has rubbed off on her parents. It’s given them reason to pay closer attention to classical music, they said.

“Before, we couldn’t tell the difference between conductors and players,” Shingo Goto said.

Satya is an emerging young star of ballet who recently performed the lead role in CBT Center for Dance Education’s ” ‘Twas the Night Before Nutcracker” and won the Hope Award at the regional Youth American Grand Prix in Atlanta.

For the “Classical Fusion” concert, she will dance to selections from Bizet’s Carmen Suite, choreographed by Jill Eathorne-Bahr.

Her mother, Lilly Wilkins, a trained flutist, has exposed Satya and her brother, Michael, to classical music since Day One. She knew that proximity would almost certainly lead to appreciation, she said.

“I was exposed (as a very young child),” Wilkins said, “and I’ll tell you, that was the key.” Classical music “was next to me; it was just like eating breakfast.”

It never occurred to Wilkins that classical music wasn’t “fun,” she said. And it hasn’t occurred to her kids either. In fact, it’s helped them emotionally. Wilkins, who homeschooled Satya and Michael until last year, encourages them to associate images and stories with the music they hear. Satya will draw pictures; Michael will make up tales. In so doing, they forge a connection to the music.

When Satya dances, then, the imagery she created informs her movement, which is an expression of her emotions, Wilkins explained.

Although they listen to all kinds of music, they get bored with commercial pop, preferring classical music. “The kids gravitate toward something naturally good,” Wilkins said.

But isn’t she encouraging a form of elitism? Yes and no, she said.

Undoubtedly, classical music, like many cultural endeavors, is supported by wealthy donors and appreciated best by educated patrons, she said. On the other hand, how much money do people who prefer Hollywood blockbusters spend? Lots.

If elitism is a way to maintain high standards, then isn’t it necessary? Or is it pretentious to assume that some forms of art are not meant for the masses?

In the end, Wilkins dismisses this debate in favor of a more fundamental claim: Classical music is an intrinsic part of her family’s life. It informs the way they experience and interact with the world.

“For us – for my kids and me – music has played this big role. It’s vitamins.”

For my part, I latched onto classical music early, and my love for it increased in direct proportion to my exposure to it. The more I listened, or performed, the more I appreciated what it was all about.

My interests only grew over time. As a college student, I got a job at a terrific old record store whose proprietor and his right-hand man were up to speed on the latest great classical music recordings. With their help, I established a respectable collection of LPs that served (and still serve) as my frame of reference.

It is great fun to compare different recordings, to force oneself to articulate why a particular performance is better than another. It’s one way a budding musician or music-lover comes of age.

Now, when I watch on YouTube little Jonathan conducting Brahms, I know that he will almost certainly grow up with a lasting passion for classical music. When I hear people such as Bela Fleck or Chris Thile play Bach, I know that it’s because those musicians think classical music is totally cool.

And when I learn about someone like Amy Goto, who is more interested in Yo-Yo Ma than Justin Bieber, I know that the future of classical music is secure.

Classical music cannot be dying if Amy and others like her continue to appear, armed with interest, talent and determination. She’s no old fogey. She’s no elitist. She just loves good music.